When I was in 6th grade, there were a lot of things I was known for. To some, I was usually the last one picked for sports. To others, I was the guy you went to when you had a math problem. But to all, I was known for indescribable love for Skittles. There was something about the collection of fruit flavors that had me lined up at the student store for my daily fix. Much like M&M's, they all share the same core but they're all unique in their own way. Who ever said that what's on the outside didn't matter?

Thuy asked me several weeks ago if I would be willing to do a shoot for her. I was vaguely interested. She mentioned it would be a present for her mom for Christmas. Sounds nice, somewhat interested. She clarified that it'll be her and her FOUR sisters. Wait... come again? Did you just say four sisters? As in, there are FIVE girls in your family? If my math serves me correctly, there's a 1 in 32 chance of that happening. Her family practically defies mathematical odds. To my sixth grade self, I was incredibly intrigued. I had to see this to believe it.

Thuy and her sisters thought it would be nice if they had a theme, specifically outfits. When I saw them for the first time in their assorted color scheme, I thought to myself, "Wow, it's like the rainbow." After our introductions, I began noticing something. They're similar in appearance but unique in character, as if.... they were.... Skittles! I stood there in amusement while we were trying to set up each shot. Trang would tell Christine to zip up her sweatshirt. Annie would check her phone if she got any text messages. All the while Thao would tell Thuy to move because her sunny yellow was masking her forest green. I couldn't stop laughing.

I hope your mom enjoys the pictures. I had an absolutely blast and thanks for reminding me why I love Skittles so much. 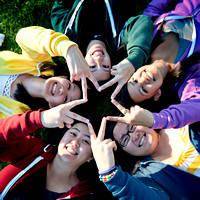