I remember a time when Pete was six and I was four and we just came back from the local liquor store. From the pennies we saved up, we bought a pack of Juicy Fruit gum and raced home to indulge ourselves. When we discovered that a pack only contained 5 sticks of bubblegum, we quickly realized we had a predicament. How were we going to divide up 5 sticks, who was going to get 3 sticks and who gets 2? Yes, we could have divided the sticks two ways, each getting two and a half sticks but given that we were mathematically challenged, that wasn't happening. Instead, we dueled each other in a game of rock, paper, scissors where Pete won by pulling out "laser," beating out rock, paper AND scissor. I felt cheated but I didn't have a good come back so he got the extra stick.

Afterwards, distraught by our never ending predicament of 3/2 sticks of gum, Pete had an epiphany. He proposed that instead of hastily enjoying our sticks of gum, we could use them as "seeds" and grow a bubblegum tree! This could very well be the end to our problem (or so I believed). Absolutely amazed, I donated the rest of my gum to the pool, we dug a hole and planted our gum. Religiously, we watered our "seeds" for three weeks, in hopes of growing our very own bubblegum tree. Three weeks later, much to our surprise, we were not rewarded with our beloved tree. Rather, we inadvertently grew grass where our tree should have been. GRASS! Shows you how often we watered our backyard.

For those that don't know me and Pete, I believe this story captures the essence of our relationship as brothers and highlights a small page from our childhood. It was mostly a time of exploration where the naive little brother followed the wiser older brother and did an exorbitant amount of random, and sometimes careless, things. Nevertheless, it's hard to imagine a life without Pete and how much he has been instrumental in my personal development, even if he convinced me that we could grow a bubblegum tree.

Now, two decades letter, I find myself partaking in another one of his ideas. However this time, we're not planting a bubblegum tree or him convincing me to jump into a pile of leaves (which hurts by the way). This time, he wanted me to be a part of his pseudo-surprise proposal - she had a hunch. Orchestrated in front of the Sleeping Beauty Castle at Disneyland, I watched and captured the story of my brother proposing to his long time girlfriend Angie. I couldn't be more proud and excited for my brother and that the culmination of our brotherhood thus far has resulted in something so ridiculously awesome. And thankfully, she said yes!

Though we never quite grew our bubblegum tree, I believe that Pete and Angie's relationship - their "tree" - is likely to be more fruitful. Congrats again big bro! 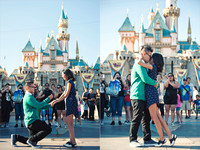 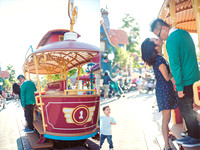 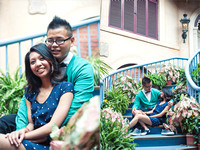 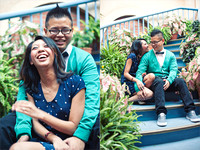