If you haven't noticed, spoiler alert, I'm ambitious. My ambition manifests itself over multiple disciplines but nothing more than traveling. When I'm traveling, I want to see EVERYTHING. The way I figure, it might be a long while before I return so why not make the best of an opportunity and inundate my visual senses. Besides, I'm a photographer. Can you blame me?

My trip to New York was somewhat haphazardly planned and wasn't entirely intentional. I figure a five day stay in Boston would have been a little too much so after very little consideration, I impulsively planned a day trip to New York. Yes, I know. I've been told several times that I was absolutely crazy. How could I do such a fine city a monumental injustice and give a tiny town called Boston three times more attention? More importantly, how in the world could I possibly see New York in one day? I mean, the Met warrants a half day visit and it'll probably take you another half day just to transverse through Central Park. Well....I introduce to you... (drum-roll.......) my 10 hour walking tour! It consists of all of the major sites so you don't have to do the thinking, just the walking. Notable sites include:

- Empire State Building
- Time Square
- Rockerfeller Center
- Central Park
- The Met
- Guggenheim
- Statue of Liberty from Battery Park
- Charging Bull (and all of the fixings, if you know what I mean. Hint: it comes in a pair)
- Wall Street
- Ground Zero
- Brooklyn Bridge

.. and much, much more! Who's crazy enough to go on that? As I mentioned, HAPHAZARDLY planned by yours truly. In retrospect, I can't say it was one of my finest plans but it didn't entirely flop either. I consider it a sampler of New York's highlights and I'm perfectly happy with a small taste of the Big Apple. I'll just have to find a way back for the rest of the fruit. Enjoy! 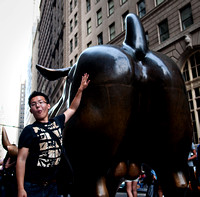